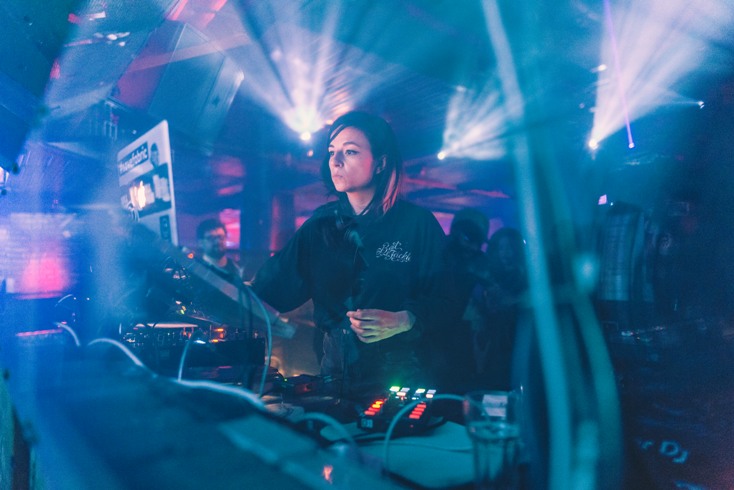 As a writer, dj, radio show host, label owner and promoter – Kirsti Weir has spent a long time doing her own thing and has never chased fads or fashions. A devout fan and follower of all things electro, techno and electronica – her style and taste most definitely follow the path set out by George Clinton and Kraftwerk after they collided in an elevator.

Although she’s not one for bragging about her knowledge or extensive experience, in recent years Kirsti spent quite some time working behind the scenes with the team at London clubbing institution Fabric. It suffices to say she really does excel is her thirst for the latest sounds, which is exactly what she offers up on her excellently on-point null+void radio show from 10pm til midnight, once a month on Leeds based KMAH.

Originally starting out as one half of the well respected and written null+void blog over 10 years ago, she decided to expand into a record label back in 2015  and has been going from strength to strength over the last year. As someone who puts her passion at the forefront of everything she does, we were greatly intrigued to find out a little bit more about how she got into the whole dance music arena, and what she’s been getting up to as the year draws to a close.

First things first, where are you from?

“I’m originally from a town called Harrogate in Yorkshire but I’ve not lived there for about 15 years now.”

Can you remember the first record you bought?

“I think it was Miss Kittin – Beat That Bitch With a Hit from HMV in Reading where I first started playing records.”

Your first raving experiences were at the infamous Checkpoint Charlie during your University days, what drew you there?

“Some of the mates I had made were regulars there and introduced me to it, it was actually the first club event I had ever been to as I was more of a rocker before. It kind of blew my mind, I’d never heard that music before. Matt Carter and Neville Watson were residents then you’d have secret surprise sets from Andrew Weatherall, Billy Nasty and the like so I was listening to some of the best.

When did you realise you wanted to get more involved with Electronic Music?

“I started mixing records practicing on mates’ set ups straight away and generally got involved into what was going on around Reading. Mates were doing raves and club events so I started playing at those before putting on my own. There were a lot of people doing a lot of things there – one of my mates used to squat buildings and put on raves. So a group of us also joined in and did a night called ‘Uncle Paul’s Toilet Rave’ at the arts centre – it was a bit silly: we’d create a canopy of toilet roll in the room for each event and project onto it.”

How did null+void actually get started then?

“This was initially a project between myself and someone called Kaif Ahmed who was a really close friend and also a VJ for the night we ran together in Reading. We were both looking for a project to work on some skills and express our interests – him visual arts and technology, and me the music. He built the website took care of that and the design, wrote about technology and art. I wrote about music.”

You’ve been plugging away for 10 years, that’s a proper shift! Tell us more about your evolution…

“Today it’s more about the record label and radio show. As I enjoyed DJing more and more I just felt the radio show was a better format to support the music I was writing about on the blog. I got a great opportunity to do a few spots on Rinse and then KMAH gave me a more regular residency on their station. It’s run by some great people and I do like the Yorkshire connection.

Then I started the label three years ago with an amazing release from Shinra – someone I knew from those days in Reading. Starting the label is a big highlight of course and a milestone.

Specifically some highlights would be, probably the Scand x Mechatronica party in Berlin we all went over with a crew from London and did this 24 hour party, repping what we do was just mesmerising to see a queue when we arrived. I guess what’s great about it is the overall experiences it’s given me – the friendships, raves and music. And something that made me very happy was to hear DJ Stingray drop one of the null+void releases on his show with Mumdance a little bit ago. I love that radio series and Stingray is the source! I hung around at the front at Oval Space when he played and super annoyed the staff before I managed to hand him a TP. That’s pure joy – hearing Stingray to drop your release. With all my releases I push them really hard in the right places because that’s what I believe the artists deserve.”

Is there anything you think you could or should have done differently?

“Been more consistent with it, but things happened along the way in life and also new jobs and opportunities that I put my energies into at different stages.”

You’ve also been part of London’s underground music scene for a long while: how does the state of play look at in 2018?

“There is so much going on right now and so much good stuff. Some great new clubs have opened recently – FOLD, The Cause and The Glove That Fits for example and they are all doing some great things musically and community wise. My feed is constantly full of some wicked events and releases.

London is hard though, I’ve actually just moved out of the city, which has allowed me to go freelance and open up my time to more of a variety of projects and get away from the grind. London is too expensive. We’re going to see the next generation going to other cities but it will be good if this means it stops being so London-centric which might be exciting. Actually I read yesterday that more people in their 20s and 30s are leaving London than ever before.”

How do you feel about the current resurgence of Electro?

“It means a lot of people I know are getting gigs and recognition they deserve so I’m happy with it. I just hope that it maintains it and exists alongside all the other genres and doesn’t get cast away as a ’dated sound’ again – which it was seen as before.”

Any particular labels or artists we should be looking out for right now?

“For me Super Hexagon are doing super exciting things, Jacob Wiltshire and FFT are also making some inventive rave music. ‘No data Available’ who’s done the latest release has been cracking on making some amazing stuff in the studio. I’ve got a couple of great records from Polyphan Polyphenix on Rawax who’s been another good recent discovery too. The playlists for my radio show are probably the best resource for who I think people should be looking at.”

What have you got coming up next?

“I’m doing a party on December 7th at The Glove That Fits, it’s the perfect place – small capacity basement with a D&B sound system. I’ve got 4 live sets from 4 of my favourite artists, two from the label: no data available & T-Flex, and two guests: Datassette & FFT. They are all working on something special, NDA has expanded his live set up is bringing out a lot of equipment and T-Flex and FFT will be actually making their live debuts. Datassette is just a major talent, he’s working up an electronic funk storm for it.

T-Flex is releasing his first record with me and it all ties in nicely because I first heard his tunes when Datassette dropped one at the null+void label launch a few years ago. Was blown away – and he was a mate I had no idea made music.”