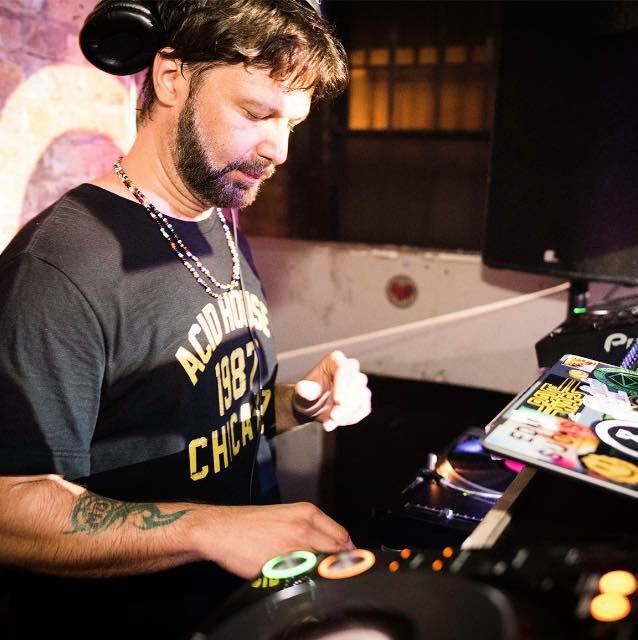 Bill Torres aka Mystic Bill is one of the most influential Chicago House DJs that has retained his underground credentials for over three decades. Part of the Trax Records roster, he produced and released tracks both under his own name and also as a ghost producer for others.

Having known of Bill’s Trax Records release years ago, Josh wasn’t aware he was still producing until he heard “U Won’t See Me” on Snuff Trax a couple of years back. When the pair got chatting on social media, he was astounded to discover that Bill hadn’t played the UK for many years, despite being a regular in Europe and so booked him to play at an “I Love Acid” party in London back in late 2016. Absolutely rocking the gaff with a mixture of new underground acid and house, a few classics – Bill’s set spanned vinyl and CDJs in with a load of acapellas and battle loops to boot – a really impressive set both technically and musically (which Josh wishes he’d recorded!).

With upcoming gigs at London’s Spiritland sound system later and a date at Panorama Bar – Josh put a few questions to Bill about his history as a producer and DJ, from the early days at the end of the 80’s in Chicago up to right now:

You grew up in Miami, what was your first foray into nightclubs and dance music – how did it influence you into wanting to be behind the decks?

“As a kid I used to watch my cousin George practice before his gigs. He taught me the process and would let me mix along with him. The first official party I played was at my 13th birthday party in 1981. “

What was your first release as a producer?

“I’d been working on music since the minute I arrived in Chicago but my first release was a remix I  did with my friend Carl for Vince Lawrence. The song was called ‘Lack Of Love’ by an artist called Kae Ladrae on Demand Records. On the vinyl, our mix is noted as the ‘Techno Mix’ with no credit to either one of us unfortunately. We got $200 each and were officially ‘ghost remixers’ I guess you can say.”

Ghost producing! What other releases have you had a hand in without public credit?

“Many! I did remixes for Shay Jones, Darryl Pandy, Richard Rogers, even artists like M-People where the company I was with got hired out to do remixes of a song called “Excited”. My mix was selected for a special promo release and I wasn’t aware of it till a friend pointed it out. The credit was given to one of the other guys. Those kind of things are what disillusioned me with the business for a while, not only was I doing some of these mixes on spec, but I wasn’t receiving proper credit for them either. It was a handshake deal so not much I can do. I wised up shortly after.”

How did your first release with Trax records come about?

“I met Larry Sherman through Vince Lawrence. Vince introduced me to Larry back in 1989. I had given Larry some tracks and he sat on them for a while. All the time I had been giving him a track every so often, finally some years later he contacted me about doing an LP with all the music I had submitted. I wasn’t very happy because many of the songs were edited to fit on and LP instead of making it a double pack release…”

The legendary Larry Sherman was notorious for being a disreputable businessman, pressing up records on recycled wax, not paying people but released so much great music. What was working with him like for you, and what’s your personal opinion of him?

“Well, besides treating some of his artists unfairly and pressing recycled vinyl, he was quite a humorous guy.

I remember him handing me a stack of white labels and telling me ‘Bill, this is your own record label, sell these and keep x amount … bring me back the rest’. When asked what was printed on the vinyl, he told me not to worry about it, if anyone had any problems to talk to him. So I did as he said and named the label “Tweaked Records” and sold most of the copies locally and in the US. To this day I have no idea who made the music or what the actual deal but everyone was playing this record from a mystery artist. I went as far as trying to Shazam them recently with no luck of knowing who the actual artist was. I thought at some point someone would step up and say something – in which case I was ready to direct them right to Larry – but it never happened.

As far as the pressings went, I would say yes. Larry had boxes and boxes of vinyl ready to be recycled. I remember Ron Hardy was working at the Plant and him cluing me in on what was going on. At times you would look at some of these records and wonder how they would sell, and other times you couldn’t tell the difference. “

So, Tweaked is a mystery label then – which imprints were actually, officially yours?

“My first label was called Physics.

It was through a P&D deal I had with Mirage Entertainment (Larry Thompson, Rick Lenoir & Gary Wallace). There were just two releases prior to the company closing it’s doors.  I later started up Chicago Revisited, which I’m getting ready to relaunch along with a new label called Children Of The Box.”

Chicago Revisited, nice! On that note: Is there a particular track that takes you back to the early days of Chicago? And how special was Chicago to you?

“It’s hard to pinpoint one, but all the anthems with strong messages – Promised Land, Children Of The Night, We Are Future, Open Our Eyes.

Chicago was quite an amazing place to be during those times. You could go out any night of the week and there would be several things going on. If you wanted pure soul, you would go to places like Club Laray & Rialtos, if you wanted more of the Industrial & House sound, you would go to Medusa’s or Smart Bar. If you wanted to here Disco mixed with Acid Tracks & Chi House, that would be anywhere Ron Hardy, Farley & Lil Louis played.”

DJ or artist – which comes first for you and what connects the two?

I was 16 playing guitar for a band called “Life In Sodom” (who still to this day perform and release music). They were mainly a synth band so it was where I learned to program a drum machine and mess about with synths.”

What’s your approach to producing music – late night studios sessions, continually tinkering with ideas, just jamming and seeing what happens, or having a set out aim ahead of writing?

“There’s a bit of a balance. At times I tend to be more organized, others not so much, but it all works out at the end of the day.”

In the UK, Acid House came on the back of a very politically charged time and itself was embroiled in youth movements against the establishment. Coming from America, what does Acid House mean to you?

“As a movement, it wasn’t quite as political. It wasn’t till after the ‘Summer of Love’ happened in the UK that I noticed a bit of that here.

As far as a musical style and its relation to drugs, I feel like I watched it all develop. Ron Hardy was the first DJ I ever heard play Acid (along with various styles) to a predominantly black crowd. There was also definitely a wide use of drugs like LSD and MDA at the time. I do remember a party called ‘Phuture Shock’ which happened at a car garage near Smart Bar, and clubs like Medusa’s and Berlin doing US/UK Acid House nights. I played a few parties at a place called ‘Wholesome Roc’ which brought together a wild mixture of people.”

Do you see dance music as being political today, or escapism and entertainment?

“Escapism and entertainment more so than anything political. Although I feel there will be a resurgence due to current politics in the U.S.A.”

Despite being a regular at places like Berghain in Berlin and playing in Germany in general since the 90’s, why was last year’s London appearance your first in nearly 25 years?

“I wasn’t as serious about my business as I should’ve been in those days. Although I was booked pretty solid every weekend in the US, I was slacking on returning calls to places like Ministry Of Sound and other clubs that were trying to reach out.

In the early to mid 2000’s I felt out for a while, so that might’ve been part of it as well. I’ve spoken to some where they felt my absence from the scene during those times has helped develop my ‘cult status’ and i’m fine by that :-)” 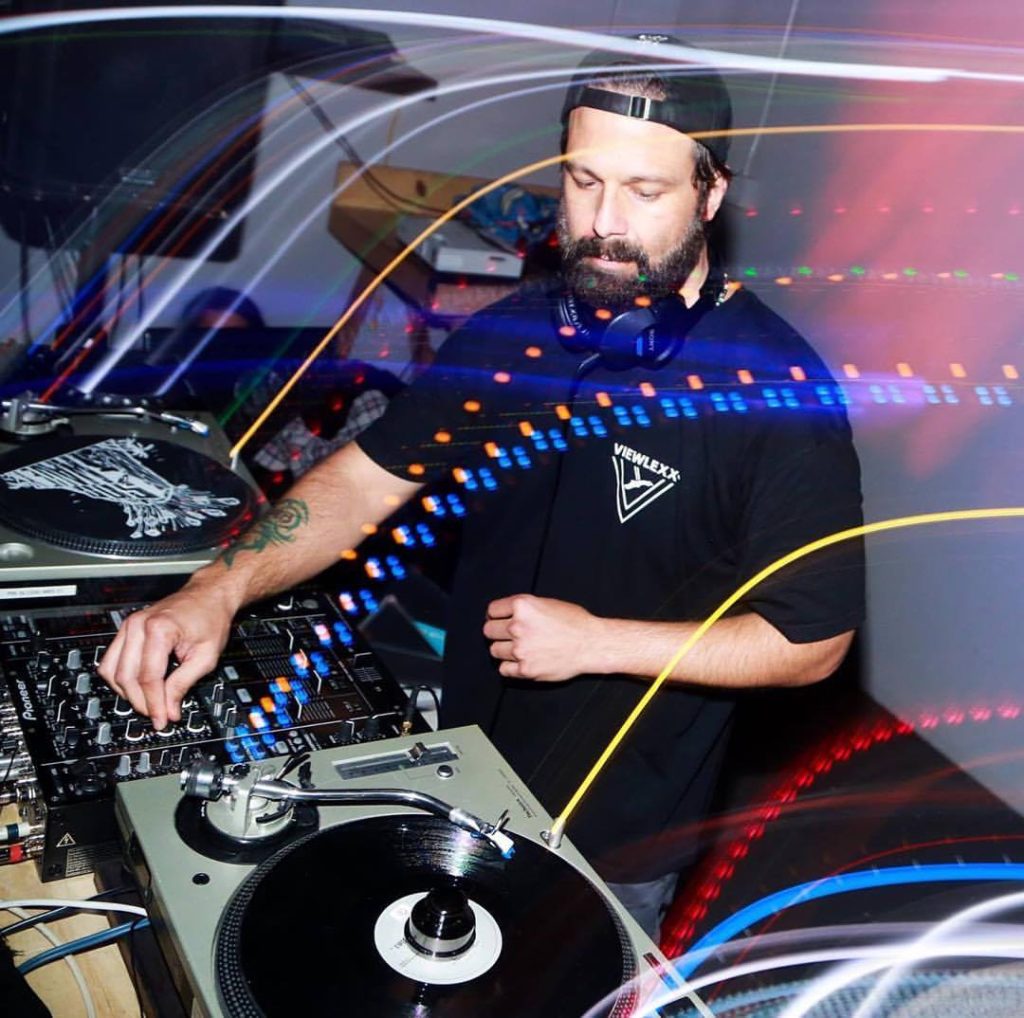 How would you describe the music you play these days?

“I play a variety of styles and have spun alongside DJs like Kerri Chandler, Jon Heckle, Danny Krivit, Honey Dijon, Ron Morelli, & I would’ve played with Kink in Turkey but had to cancel due to the Military Coup incident that happened. So yeah, I basically play according to the booking at times.

Whatever it is I’m playing, I definitely like to keep it underground. I’ll play a familiar track from time to time to break the monotony. I prefer when I get free reign and can take people through all the peaks and troughs.”

What’s the story of these lost cassette tracks that just came out on Crimes Of The Future, and how did you hook up with Scott Fraser & Timothy Fairplay?

“I named the release the lost cassette tracks because these were some of the tracks that I would play off of cassette at parties back in the 90’s. I didn’t think much of them till I recently listened back and decided to send copies to a few people. My friend Melvin (DJ Trax) happened to play one of the tracks for Scott, and he was interested in releasing it on COTF. I luckily had the midi files and synth parts I used, so I was able to give the tracks a better mixdown. That helped in not having to take away from the original elements.”

Name a record that no-one would expect you to love, but you do:

“I have two:  one would be Jerry Garcias first solo LP entitled ‘Garcia’ and the other is ‘Burning Blue Soul LP’ by Mat Johnson (The The).”

Do you have a philosophy to life?

“MESH (Meet Every Situation Head On)”