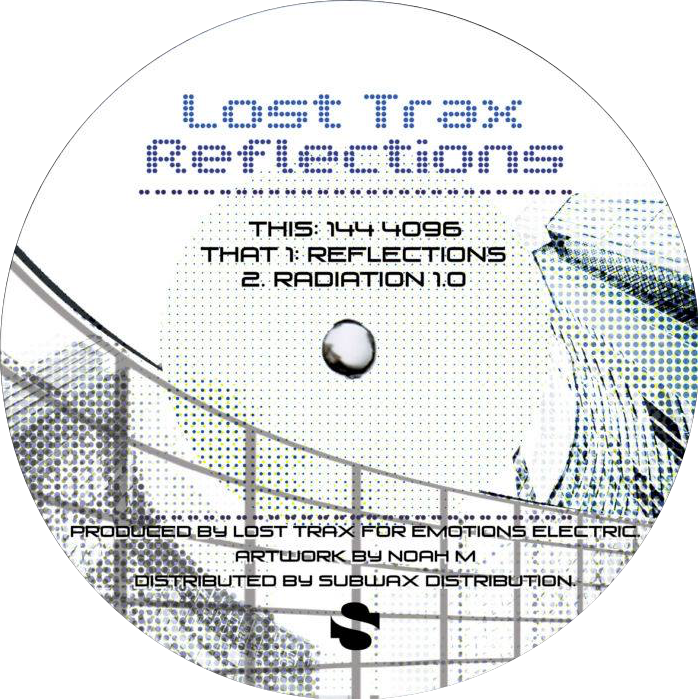 Lost Trax is a collaboration between artists who are all doing what they do best, creating emotional music, straight from the heart.

Having so far managed to keep their identity under wraps  – the ever mysterious outfit has slowly evolved a fine collection of releases over the past 10 years, thanks to the support of SCSI-AV, Tabernacle and Frustrated funk.

This latest 3 track EP “Reflections” comes courtesy of Barcelona based “Subwax” distribution crew, and sees them pursue their sonic mission – carving out a vision straight from the mould of Detroit’s classical techno influences, etched in acidic futurism and frosted by glacial electro.

Side A, titled “144 4096”, rises high from the depths of Lost Trax’s machine layered underworld as the driving tweak of a 303 flights high above a sombrely textured pad. With added Drexciyan tweaks echoing faded radio transmissions from a parallel age: the sonic palette of this lead track looms large as rattling percussion strikes a beat.

Steeped in a warmer glow, B1 “Reflections” moves to skippy 808 patterns and a shuffling bass end that evokes a lighter age as an over layed mono synth brings a certain lift to proceedings. Last but not least, B2 “Radiation 1.0” captures the essence of an early Derrick May jam, stuttering and repeating in forgotten 80s age computer language. Whilst it might be obsolete in the internet age, this sure does pack a punch and finishes off yet another gem destined for the collection.