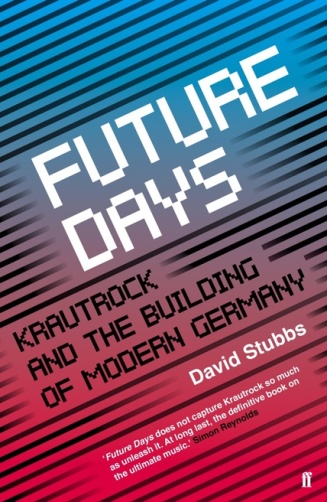 If you enjoy a good story, be it before bed, on the train or in your favourite chair and are in the market to dig a little deeper into your favourite genre of music – then you’ve come to the right place. We’ve thumbed through a selection of brilliantly written books that caught our attention and interest – and hopefully provide some much needed infotainment, or at least a moment’s peace on the commute to work.

An in-depth study of the roots, growth and bloom of post-war culture in Germany that led to the development of homegrown experimentalism and the scene that formally became known as “Krautrock”. The book throws light on the social and political context that informed them, serving as an indispensable guide for those wanting to understand how much of today’s music came about, uncovering a wealth of highly influential and pioneering musicians.

Rip It Up and Start Again
By Simon Reynolds

Picking up where punk came to a fitting end with the self-destruction of the Sex Pistols in 1978, music savant Simon Reynolds puts pen to paper and outlines what happened next in this brightly packed account of the Post-Punk era. Taking in the careers of John Lydon, Joy Division, the Fall, Gang of Four, Talking Heads, Devo, Pere Ubu, the Specials and the Human League – the book reaches an anticlimactic ending with Frankie Goes to Hollywood, all whilst paying hommage to David Bowie and their roles in furnishing the popular culture of its day.

Once in a Lifetime: The Crazy Days of Acid House and Afterwards
By Jane Bussman

Award winning comedy writer Bussman drums up a nostalgic, memory-evoking scrapbook  about “The Crazy Days of Acid House”. Based as much upon her own experience, as it seeks to live it out through others, the book is jam packed with pictures and scraps, quotes and photos, bringing together a collage of voices: from DJs to anonymous ravers, caners and victims of fashion. Formatted as a diary, she gives detailed accounts of parties, the slang, the clothes, the habits and obsessions that developed, year on year as the fledgling movement exploded.

Can’t stop, won’t stop: a history of the hip-hop generation
By Jeff Chang

Based on original interviews with DJs, b-boys, rappers, graffiti writers, activists, and gang members, Jeff Chang paints some unforgettable portraits of many of hip-hop’s founders including DJ Kool Herc, Afrika Bambaataa, Chuck D, and Ice Cube. Chronicling events, ideas, and the music from the very inception – the book covers hip-hop generation’s rise from the ashes of the 60s into the new millennium: a powerful cultural and social history of the end of the last century from an Amercian perspective.

Solid Foundation: An Oral History of Reggae
By David Katz

Already a well-known author for People Funny Boy: The Genius Of Lee ‘Scratch’ Perry and Caribbean Lives: Jimmy Cliff. Katz brings together an essential collection of over 300 interviews for a definitive account that captures the voices of some of the earliest Jamaican innovators of the 1940s, to the new stars of the 21st century.  It details the entire evolution of Jamaican popular music, taking in ska, rock steady, roots reggae, dub, dancehall and ragga, whilst documenting some of the most compelling characters in popular music.