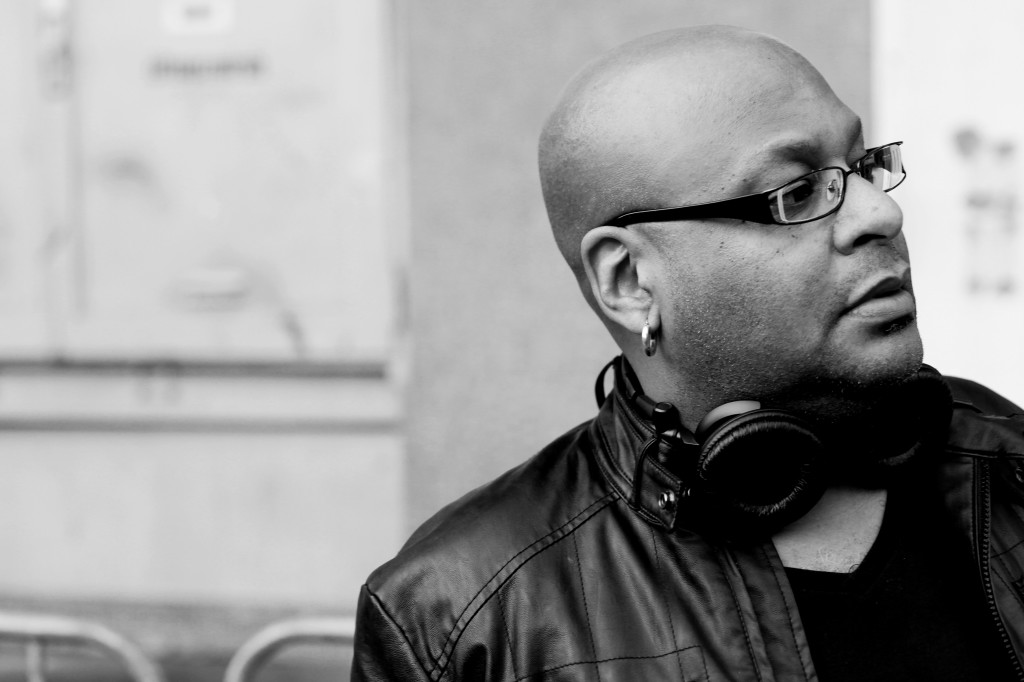 Detroit-born, Chicago-and-Berlin-based Alan D. Oldham once earned himself the title of “Detroit Techno’s Renaissance Man” by Muzik Magazine . An Electronic musician, label owner, graphic illustrator and touring DJ – he’s certainly a man of many talents and far from afraid of putting them on show.

A lifelong cartoonist and graphic designer, a young Oldham published his own indie comic book “Johnny Gambit” in 1987, gaining notoriety in his home town. That same year, Derrick May hired him to illustrate several memorable pieces for his fledgling Transmat imprint, leading to Oldham’s first involvement in the techno scene. More art requests quickly followed, most famously from the Djax-Up-Beats label (NL), where his artwork has not only stood the test of time but has also been integral to its identity. Fast forward a few years and Oldham found himself under the tutelage of Mad Mike Banks. Initially hired as UR’s “Minister of Information”, when the time came he was asked to replace the departing Jeff Mills as DJ on UR’s world tour. Since those golden days, he has continued to rock crowds across the globe with his own no-nonsense brand of funky-ass techno – under the guise of DJ T-1000.

In 2005 he established a permanent European base in the world’s latest electronic music capital, Berlin. When he’s not behind the decks or in the studio producing music for Tresor, Minimalsoul or his own Pure Sonik and Generator imprints, Oldham is busy with his artwork. His drawings and large-scale paintings have been on display and brightening up the walls of art galleries in Chicago, Berlin, Paris, Los Angeles and Amsterdam most recently. 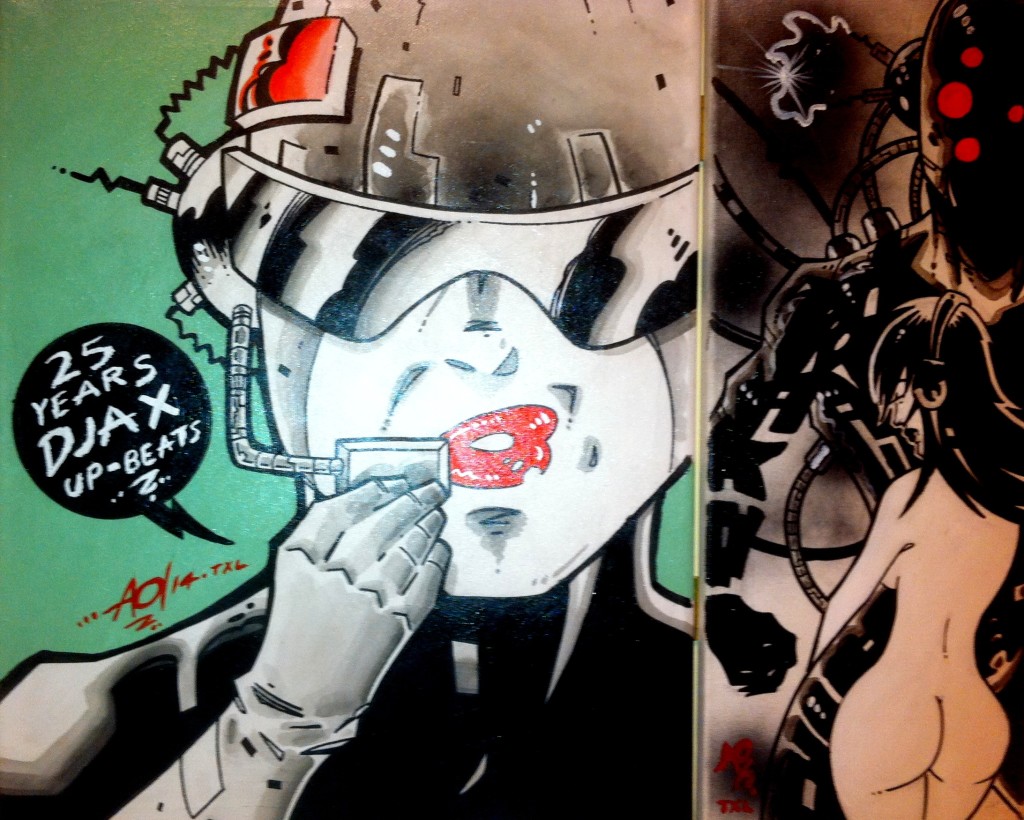 You’re a Detroit native born and bred, tell us about growing up in the city and how it shaped your outlook?

“I had a great childhood, but growing up in Detroit with no real support in pursuing your dreams, you have no illusions and you learn life lessons quickly. It made me very independent and survival-oriented. Even today, I do most everything myself. Producing, DJ booking, paintings, art shows, comics. No sponsors, no partners, no clique. Being a native Detroiter, you quickly get checked for having illusions.”

When did you start drawing and what made you decide you wanted to be an illustrator?

“I’ve been drawing my whole life. I always say that all kids in kindergarten start out drawing, I just never stopped. I always liked cartoons on TV and comic books growing up, and it just made sense that I’d want to someday draw for my heroes at Marvel or DC. That never happened, but I did get published eventually, and the music business was far more rewarding as only the top 1% of comic creators get to see the world going to comic conventions. I got to see the world as a top DJ.”

What was the inspiration for your first comic, “Johnny Gambit” in 1987?

“In the 80s, comics were changing with “Love and Rockets,” “Mister X,” and the first modern Japanese Manga and Anime were coming to America at that time. I was into New Wave at the time, too (not so much punk, I liked the stylish stuff and still do). So I combined all those influences into one character, “Johnny Gambit”. Once I kind of made my own style, I got noticed and published. 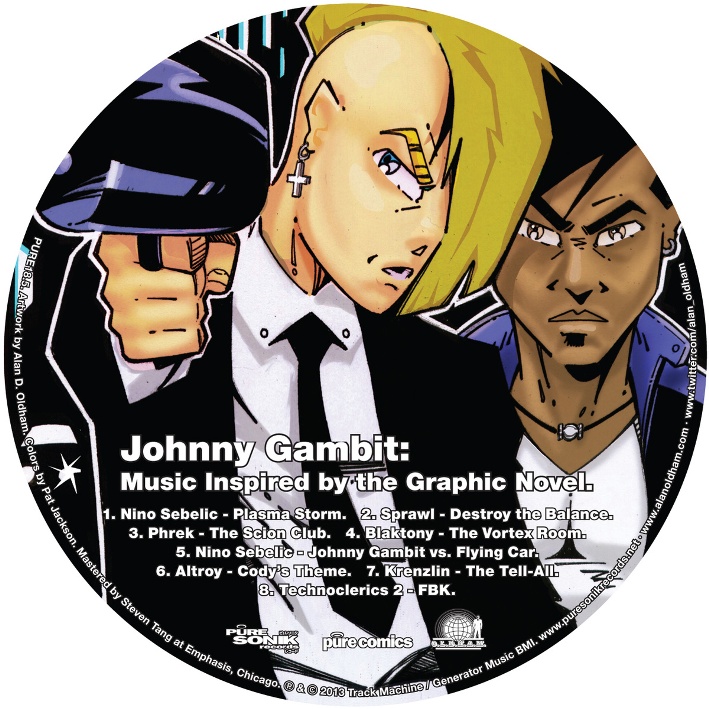 You grew up with Derrick May – what was it like to be a part of the emerging music scene at that time?

“Derrick was the first guy to get me roped into the Detroit Techno scene by having me draw his labels. It was very exciting at the time because all these English guys were coming to Detroit to meet Derrick, Kevin and Juan, and sometimes I was invited to hang out. Depeche Mode going over to Derrick’s place to hang out, or Derrick meeting New Order and playing the Hacienda, that was huge for me. Just the concept of making records was a big thing back then, too. And guys I actually knew from the hood were doing it. It was around this time I had my radio show, so these English cats would come to my show for interviews and stuff. It inspired me to try and DJ and produce my own tracks. I later hooked up with UR and made it out into the world, but that’s another story.”

How did the link up with DJAX / Saskia Slegers come about?

“I made a demo with the help of some guys I knew who had a studio, and nobody from Detroit whose records I’d been supporting on my radio show wanted to put it out. So I went to Record Time to do my due diligence and check out European labels who might be interested. I came across a record from Djax-Up-Beats from Holland and copied down their contact info. The thinking was that my cousin in the Air Force, who was living in Holland at the time, could actually drive over to Eindhoven and collect for me if I got dicked. Anyway, I sent the demo off and a couple of weeks later I got a phone call from Saskia. She loved the demo but knew my name as the guy who drew the Transmat labels. I only ever did the one 12-inch for Djax, but did hundreds of labels from then on”. 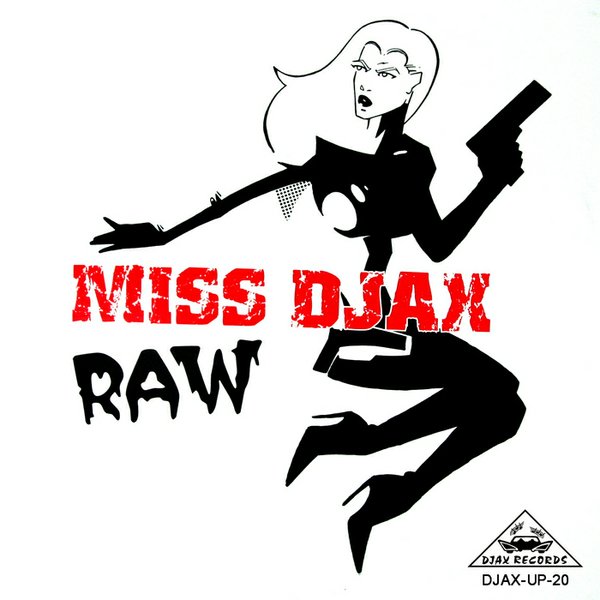 Did you ever think you’d go on to have a career via your music/drawings?

“Strangely, I was having breakfast with Mark Broom the other day in Antwerp, and I told him that I thought I’d be doing the international DJ thing for 5-7 years, see the world, meet some chicks, and have some fun, and get a real job eventually. I’m now 20 years in, it’s crazy! What’s even crazier is the reception my paintings, comics, and art shows have gotten these past few years. It’s kind of overshadowed my DJing and production. But, I’m super-gratified at the response. Paintings are selling and I’m doing more art jobs than ever. It’s nice to have something different to offer the people. It’s evolution.”

What new projects are your working on at the moment?

“My current art show, “Visual Noise,” is showing until 15 June at Record Loft, Berlin. After that, I’m planning my first gallery show in Vienna. I’m also designing a box set project and logo designs for Mark Broom. Musically, I’ve got “This is Pure Sonik Records: Mixed by DJ T-1000” on CD and digital. The DJ T-1000 “Signal Boxx” EP is out now, and I’ve got a house track on the final Detroit Beatdown comp on Third Ear Recordings. There’s supposed to be a vinyl pressing of DJ T-1000 “Drums and Weapons” and a remix EP to follow it, which I’m also waiting for…”

Special thanks to Marie Staggat, Berlin for the biog photo. 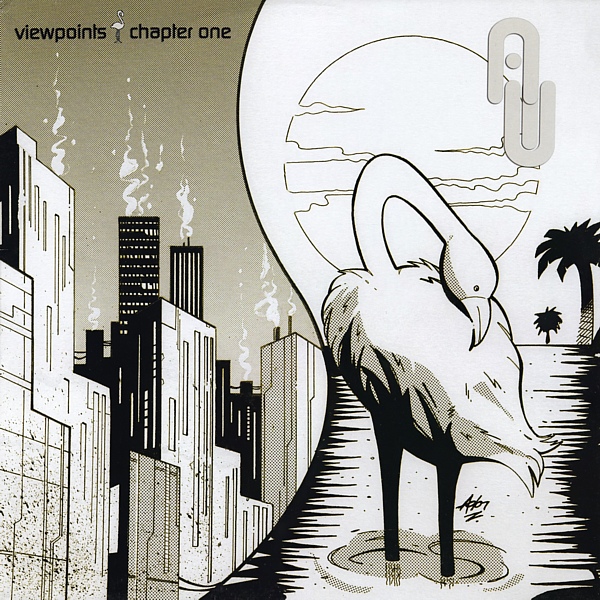