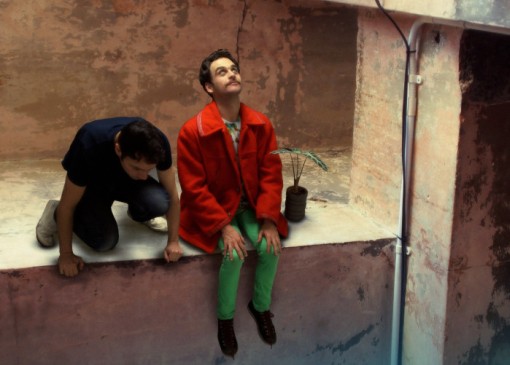 By their own definition, Sculpture is an opto-musical agglomerate made up of London based Dan Hayhurst (a musician), and Reuben Sutherland (an animator). Whilst in the first instance this might baffle your brain, it should come as no surprise – their on-going body of work is nothing short of a sensory revelation.

Dan plays media devices and electronic instruments, Reuben plays video zoetrope turntable: skilfully spinning together a whirly-gig of sound and kaleidoscopic vision, all in realtime. When boomkat described their work as “Sun Ra meets Ekoplekz in a conical flask of liquid mescaline, all spun thru a centrifuge at Daphne Oram’s home lab…” they couldn’t have been more accurate.

Having amassed what is fast becoming a collectors dream in terms of physical products, a series of musically animated picture discs that reveal a secret world of animated of psychoactive treasures when filmed at 25fps. With an all encompassing approach, the duo amalgamate the best of modern electronic music with kinetic art, comic strips, abstract animation, audiovisual cut-ups, all through the a prism of analog and digital filters – involving tape manipulation, samples, found sounds, aleatoric and algorithmic programming; all under the umbrella of live improvisation.

With the duo set to release their next full-length LP on 12th May, entitled ‘Membrane Pop’ on Software Recording Company, we caught up with one half – Dan – via email to delve a little deeper into their world and enquire a about their creative dynamics.

What is your and Reuben’s background?

“Reuben’s is Design, Animation, Motion Graphics and directing videos. As for me, playing and producing music. I’ve actually been making music as ‘Sculpture’ since 2001, but Sculpture in its current form as an audiovisual duo started in 2008.”

How did you meet & come to start working together?

“Pretty randomly! Reuben moved in next door to me and we hung out for a year or so, before deciding to combine processes. He was making these fragmented animations with animated discs and he noticed this odd, abstract music was coming through the plasterboard wall from next door – so we were already warping the local sensorium with a similar approach to recombining elements in a hyperkinetic and spontaneous way.”

“We eventually decided, I mean it just became too obvious, that we should do a show. We didn’t rehearse because we just wanted the two sensory manipulations to occur simultaneously, without too much (any) conceptualising in advance from us. That was a thing that seemed to generate a lot of energy so, we continue…”

You obviously enjoy working across different media – how does this shape your creative process?

“Well I think of music in visual/physical terms (places/creatures/substances), and Reuben’s animation work is very musical, or dance-like. We’re into materiality, using physical objects and spaces. We don’t tend to pre-plan visual/auditory combinations but allow them to happen spontaneously. There’s a big element of chance, although obviously human agency is involved – we react to sensory events as they occur and sort of ride this thing as it heads into the sun. Having said that, of course we have a conversation going on over the last 5.5 years and a library of material that’s always shifting into new permutations, and we are also starting to become a little psychic. Our aim is to use this material and process to generate an energy that alters perceptual/emotional states. Live performance is central to this – everything else is a by-product. That’s not a bad thing – all ‘products’ are representations of more powerful experiences.”

Where do you look to inspiration?

How do you know when a piece of work is ready?

“Quite often we deliberately make sure things are never ‘ready’ – or always in a state of incompleteness, or only ‘potential readiness’. For example, we just work on elements or fragments of things so that they can be rearranged in various off the cuff configurations. What ends up recorded and presented as a representation of what ‘sculpture’, is really just a snapshot of a transitory state.”

What’s the biggest challenge you face in working together?

“Apart from the constant struggle between background music and incidental film…? To be honest the combination keeps throwing up interesting angles. Just maintaining focus on one thing long enough to achieve coherence temporarily! We both get impatient for new forms to appear all the time, so maybe ‘mercurial’ is more a positive way to put it… Others might say we have ADHD etc, certainly dealing with a lot of sensory information is difficult.”

Having already pushed a few boundaries to their limit, where do you see yourself going next?

“A world tour of ice stadiums and lazeriums.”