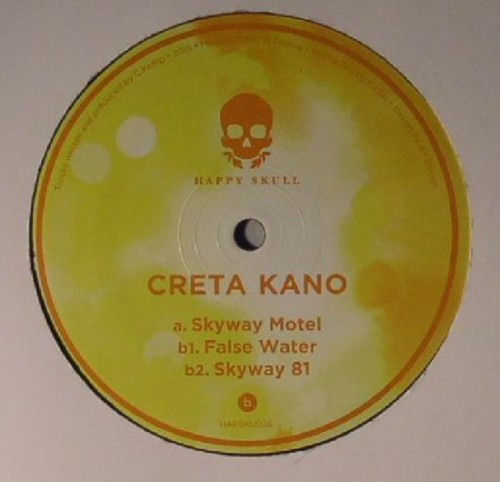 With an identity that is somewhat shrouded in mystery, Creta Kano certainly deserves a mention for the sheer depth and quality displayed in what is only a second release. Though we’ve struggled to find little to no information about the person behind the project, the music really does all the talking here. When launching their Happy Skull label back in 2013, Bristol brothers Sean and Dan Kelly promised to stick to a fine mesh of “raw machine music with melody, colour and soul” and It would be fair to say that their first EP in 2015 is a perfect representation of their mission. With an ear for whistful melody that equally warms the heart, Kano strikes a perfect balance between picturesque, rush-inducing riffs and the hard underbelly that inhabits Motor City electronics.

Sitting somewhere between the deep seas of Drexciya’s lair and Space Dimension Controller’s intergalatic observatory:  “Skyway Motel” is a particularly immersive, picturesque amalgamation of the bittersweet melodies, huggable synth-bass and rolling drum machines. A jam of EPIC proportions, this bears all the hallmarks of a stellar figure in the making, wealding a cosmic touch that transcends everyday hum drum. “False Water” steps ever so slightly off centre into a fuzzy but intensely melodious trip that hisses into techno territory that could easily be a lost early Aphex ambient work. Oozing toasty warmth, the hypnoytic melody produces a faraway gaze into the long lost era of early Euro-Detroit inspired years filtered through Kano’s kaleidoscopic eyes. Rounding things off with “Skyway 81” –  Kano’s loved-up qualities are further emphasized on a screwed, pitched-down re-casts of the original. A beachy slow-jam for a lazy afternoon – you could almost call it “Surf House”. Either way, we hope you’ll enjoy this release as much as we do.