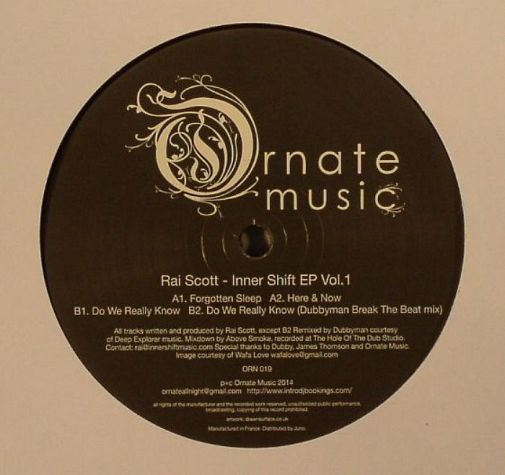 Ornate Music release solo ep from Rai Scott – one half of 2DeepSoul.

Hitting their 19th release since their debut back in 2008, London based Ornate Music keep up the good work with this rather special solo EP from Edinburg based Rai Scott, one half of 2DeepSoul. Marking themselves out as one of the go-to UK labels for underground house over the last 5-6 years, Ornate have hit trump (again) with this 4 track EP from an artist who is currently building a name for herself through a tireless devotion to producing ear-pleasing sounds with a penchant for soulful embrace.

Helping run “Inner Shift Music” with musical maestro Brad Peterson, which acts as a vessel for their productions along with contributions from likeminded artists, Rai took the opportunity with this solo excursion to delve into the depths of her mind’s eye: concocting a smooth brew of machine driven soul that marries warmth and natural melody with just the right amount of punch.

Hitting the ground running with a hypnotic bass tone and strong undercurrent of afroesque drumming, “Forgotten Sleep” ushers you into a dulcet zone that subtly expands over the course of 7 (or so) minutes, that moves ever upward in harmonic shape. Peppered with timely touches of additional percussion and synthesis – Rai aptly conjures the spirit of Trent’s Cinematic Travels whilst keeping her energy focused on evolving through her own personal space and time. The soporific roll of “Here and Now” takes you further into her contemplative sphere, teasing you with vocal whispers of forgotten somethings that could be easily mistaken for echoes in your sleep. Definitely a moment for repeat after-hour listening.

Landing back to earth with the broken roll of “Do We Really Know?”, she evokes the spirit of a sun risen morning – ethereal vocal and bright strings bringing the track to an upbeat conclusion that should fine favour amongst discerning heads and dance floors. With a rework from the one and only Dubbyman, the Deep Explorer boss uses the crisp broken beat structure to inject a wholly different energy, finding just the right angles to exploit and put a differing slant on this already exceptional piece of work.

Rai and Dubbyman’s relationship doesn’t end here as Deep Explorer has included a 2DeepSoul track on their “Far and Beyond” compilation, while Andy Vaz has also recently dropped 2DeepSoul’s “Mood Sync EP” on his ever excellent Yore imprint. Such recognition highlights the integrity behind Rai’s music, leaving us with the exciting prospect of “Inner Shift Vol 2” being released on Ornate later in the year.