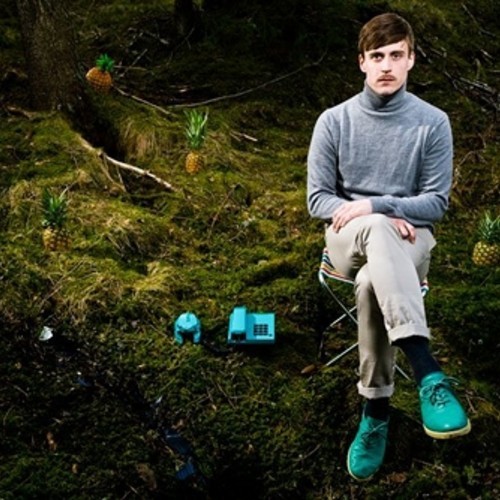 If you decided to make a sketch of the sonic trajectory this particular Norwegian producer and DJ likes to take, we would certainly advise to use a large pad. Henning Severud (aka Telephones) is renowned for a pluralist approach, you would find yourself mapping a route that covers Bergen, Rimini, Chicago, Honolulu, Detroit and Manchester (via the outer moons of Jupiter) – not your average looking route by any stretch of the imagination.

In the time-tested Scandinavian tradition, Henning Severud aka “Telephones” has been steadily gaining a reputation for an eclectic curveball approach to both playing and making records: covering house, cosmic, italo-disco and blissful Balearic fruit cocktails. Paying less attention to genre and more to atmosphere and flow, he has been christened with releases on Full Pupp, Sex Tags UFO and most recently on Gerd Janson’s Running Back – gaining favour amongst experienced ears with a delightfully breezy sound that strikes a perfect balance between organic-equatorial heat and the synthetic cold of Scandinavia. After dedicating years to perfecting his craft and surrounding himself with hardware, he is currently enjoying and reaping the rewards of his productivity. In the coming year, further releases, collaborations and live-projects are already set to for liftoff as this nordic kosmonaut readies himself for his next round of interstellar excursions. 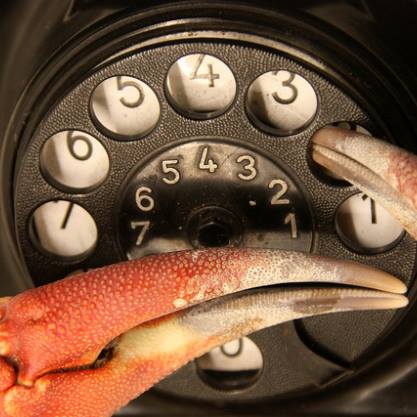 Which part of Norway are you from?

“Bergen, on the west coast – although for the most part, I grew up on an island called Sotra one hour outside Bergen.”

How did you first discover electronic music?

“Around 1996, I was borrowing a floppy-disc from the little brother of my best friend with a PC game on it: probably “Leisure Suit Larry” or “Space Quest”. It just so happened that the disc contained a programme called Fasttracker2, I was immediately mesmerized by being able to write and make music completely on my own. I’ve always been into music, playing in bands with friends and stuff, but I soon discovered a whole new realm of possibilities: there was no need for all those arguments about what to play – death metal, acid jazz, punk or grunge. Which needless to say, didn’t really sound all that good combined, haha!” 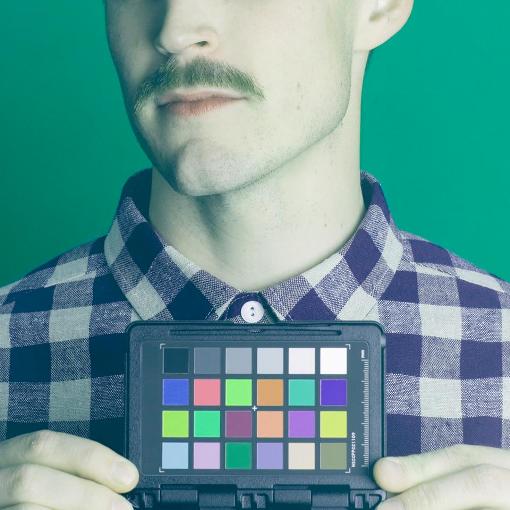 What made you decide you wanted to DJ?

“Most of my musical taste and upbringing came through skateboarding. I was into punk stuff and also listened a lot to the Beastie Boys. When I got to “Ill Communication”, I became really fond of those acid jazz and instrumental hip-hop bits which led me onto hip-hop, especially leftfield’ish stuff from Ninja Tune, Mo’wax, Stones Throw as well as anything early on Rawkus Records. I remember being completely hooked on “Soundbombing II” and as another one of my close friends was also very into it, we bought a pair of 1200’s and a crap mixer together. Like most people, I just got hooked on it. Around the turn of the millennium, I also got more and more into what was happening locally with the disco, house, and club-scene in Bergen through going to recordshops in Bergen like the Tellé-HQ (Nöstekollektivet). As I was still too young to get into the proper clubs, DJ’ing there became the way for me to sneak in through the back-door -the older dudes were always really cool and helped hooked me up.”

Who would you say has been your biggest influence to date?

“I always say Bjørn Torske, and to some extent of course Erot as well. But my first encounter with the kind of discoid house I’m still into and play was Torske’s “Nedi Myra” album on Ferox in 98. I accidentally heard it on the B-side of a borrowed cassette tape containing some school-homework. At that point I had never heard anything like that, and as the tape turned and started playing – I just sat down completely hypnotized. It was a truly magical moment for me.”

You’ve built up quite an impressive studio – care to share a little more about how you work?

“Well, it’s pretty low-key /lo-fi and hardly impressive compared to others. But, it is very effective. Except for my guitar, congas, bongos and percussion, most of my equipment and hardware is cheap second-hand, or probably fifth hand stuff; costing €50-300. I guess the most impressive thing is how much of a nice palette of machines you can set up for a comparatively little amount of money, as long as you do some research. It’s just about planning what you need to fill your soundscape and frequencies, and what kind of components you select to achieve the aesthetic you want. 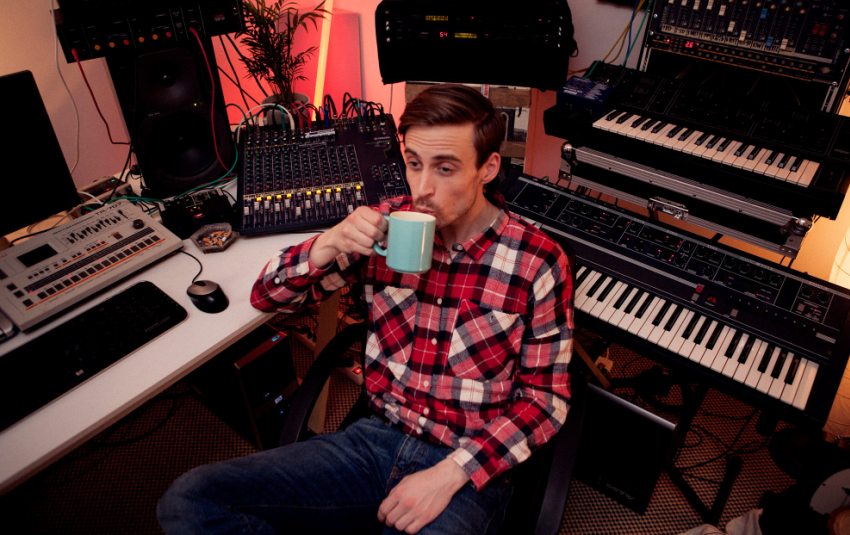 As I don’t have a sampler, I do fiddle about with things on the PC and program stuff there, but then I would perhaps run it out through the same outboard chain as what I would record in the studio, to give it the same saturation or spatial aesthetic. For effects, I have one cheap 80s multi-effect rack, a spring reverb, a space echo and a €10 cassette-deck. I like to feed stuff through my Yamaha CS-10, add reverb or delay and then send it back again through the synth with all the effects on. You can really create nice feedback/ambience, things just sort of come alive! I like to play and record parts live, and then potentially do slight corrections with MIDI, but I pretty much avoid heavy quantizing and that “grid of death”. Probably through using Fasttracker2 for so long (where you can’t actually see the waveforms), I’ve learned to trust my ears. I like stuff to have little flaws, not to be perfect. Although I should add that I am a bit of a perfectionist. I don’t have a general routine for how I work though. To be honest, I think I probably have a very stupid way of working. I record tons of stuff and sketches all the time. Then half a year later I’ll come up with a cool idea and go back to a previous track where that would fit in. For example, “The Ocean Called EP” has tracks that have been in the making for over 2.5 years, and some that have been done in a month or so. It may not be very effective but I do think it helps me separate the good from the bad.”

Your sound most definitely has a deeper/Balearic edge to it , would you say this is a reflection of you as a person, or more a reflection of the environment you grew up in?

“It’s just a personal preferences I guess, visually Berlin isn’t a particularly Balearic looking city (although I’m not really sure what that means… haha) but there’s still a laidback laissez-faire spirit here. And I guess that’s kind of in tune with the vibe: relaxed, earthly and organic. I guess what you suggest also has a lot to do with a certain inherent melancholy in the music. What we in Norway would all “gladtrist”, happysad music. Most music that really hits me is like that, ambivalent. I don’t think I would make drastically different music living elsewhere. I’ve been making tropical Balearic techno-tracks in the last few years which I’m sure Berlin should take some of the blame for. I do also quite miss the nature, scenery and sea from west coast-Norway. So maybe there’s some subconscious craving going on as well.”

With a second repress of “The Ocean Called EP” already out on Running Back, he also has a brand new EP called “Lotusland” about to arrive courtesy of Love On The Rocks in the next few weeks or so. 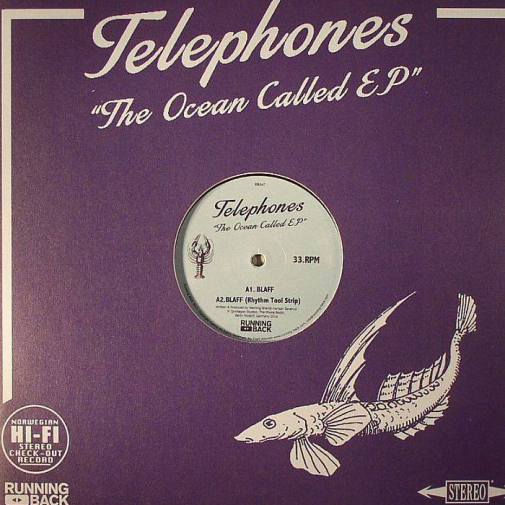