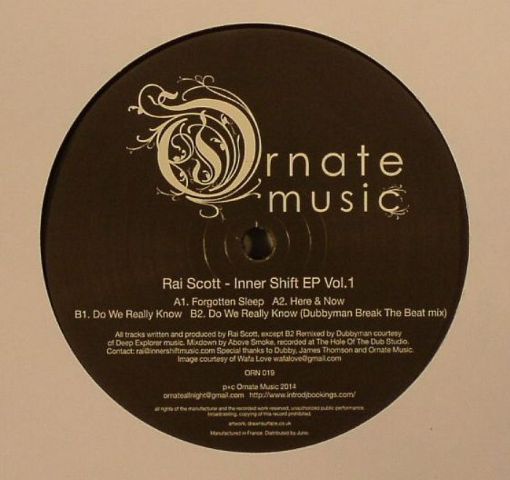 Introducing Rai Scott, one half of 2DeepSoul

Every now and again, you pick up a piece of music that over repeated listening – seems to take on a different dimension the more it frequents the stereo.

One such artist has been catching ears of late with a equal helpings of subtlety and a velour veneer that most definitely deserves your attention. Based in Edinburgh, Rai Scott has been quietly releasing her instinctive blend of deeply shaded electronic soul over the last few years getting picked up by the likes of Ornate, Yore and Minuendo along with running her own imprint Inner Shift Music with Brad Peterson. As a DJ who got her start in the UK free-party scene back at the end of the 90s, and although House and Techno has been her main influence, she is also a big fan of Jazz, Blues, and Ambient: especially material that emerged at the height of the UK scene during that early period. A lifelong student of music, she has invested time in learning the theory behind the instinct, which includes instrument lessons. As a previous Teacher of Music Technology, she understands that theory can be a structural support to help creativity evolve even further. With a sound that instantly warms the heart and soothes the mind, we tracked her down to find out a little more about her journey.

Tell us about your musical background, where did things start for you?

“I was what you call a late bloomer. It all started with the free party scene really, I was a percussionist (Djembe) back in the mid/late 90s and I collected vinyl that eventually led to my starting to DJ and getting various gigs. I got serious about making music about 12 years ago when I was introduced to Logic and I decided to have piano lessons. Needless to say, it was a few years before I wrote anything decent enough to release! I continue to study music (although I write by ear) and am currently learning the Clarinet.”

How did you find your way into electronic music?

“My love for electronic music goes way back – it started with the initial UK and US house scene back in the late 1980s, and then of course the UK electronic music scene in the 90s: including years of listening to Warp releases really. The whole free party scene in the East Midlands exposed me to a lot of different sounds.”

Tell us more about that side of things:

How did you and Brad hook up to form 2DeepSoul?

“2DeepSoul was initially a DJ collaboration, we got a few gigs together when we were living in Seattle back in 2008. It was a natural progression to turn this into a production project as we were both writing in the same house at the same time. When we work together, we tend to write a complete EP ‘live’ in the studio in one session (which we then go back to at a later date to refine and mix-down).”

Do you have any particular approach to writing music?

“It depends on the project as I don’t just write in one way. Some of my deep house tracks start with a bassline, others with harmony, or a melody… I also enjoy synthesis so I may just be messing around and be inspired by a new sound. Some of my tracks start at the piano playing chords and melodies, but others start with recordings including percussion, melody ideas, and field recordings. Some of my best tracks have been developed from old ideas that I’ve gone back to years later but weren’t that great at the time. I tend to write more than one track at a time especially if I’m in a flow, as one track tends to inspire the next and then of course there are those happy accidents that happen. It depends if I have time and headspace or am inspired enough though.”

Your label seems to be going from strength to strength – what was your initial idea for Inner Shift?

“It was a long time dream of both Brad and myself to run our own independent label. We wanted to release good quality underground music with feeling. This included tracks by friends, and us. But ultimately it was about quality control, to represent independent labels and to support vinyl.”