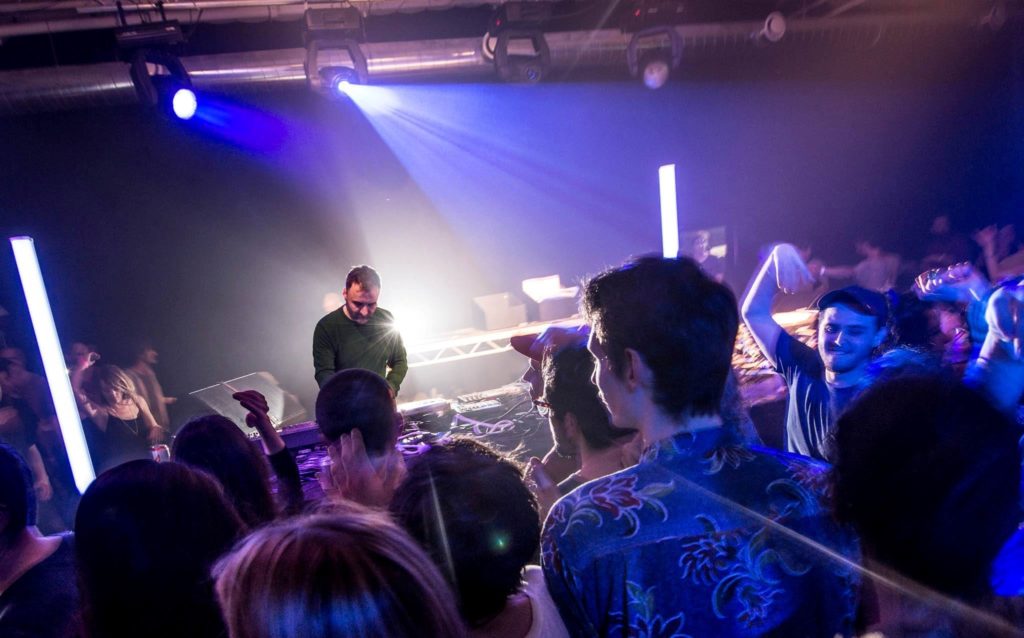 Image: Courtesy of Daddy’s Got Sweets.

For the uninitiated, the raw hypnotic depth and dubbed out aesthetics of Steve O’Sullivan’s “Bluetrain” project may not instantly provide a level of gratification that other strands of house and techno serve up on first listen. Yet, as with many good things – the virtue of patience really does pay dividends:  revealing an altogether deeper and more subtle strand of spaced out, cavernous grooves that range across the tempo spectrum. The label and then subsequent recording guise first took shape back in 1997 and morphed over a series of nine releases, covering everything from uptempo maxed out floor jams to walk and skank shuffle, more commonly associated with the swagger of a rude boy sound system.

Alongside Steve’s other output, the project took a long hiatus but thanks to the persistence and support of Yossi Amoyal at Sushitech, and his wife encouraging him to get back into making music again (read our previous interview) – we can once again enjoy a full immersion into his dubbed out alter ego. With the recent release of a double 10” Foundation Dub and a whole new live set about to be premiered during Sonar, we caught up with Steve for a chat.

You’ve been a busy man since we last spoke – how have you found adjusting to being back in music full-time?

“Well, I think I’m enjoying things a lot more now than I ever have done if I’m honest. It really is an amazing feeling to be able to bring my ideas and music to a whole new generation that up until a few years back had no idea who I was. The support out there has been inspiring and, more importantly, has made the whole music making thing fun again.

In terms of adjusting, I’ve got to say that initially I was a little concerned that maybe  people would only be interested in the “hits,” which is great in itself I guess, but the only reason I returned after a long hiatus as I mentioned when we last spoke, was because I thought I still had something to say musically. It’s about moving forward really and thankfully my new music seems to resonate and as long as it stands up well against the old tracks, I’m happy.

All in all, coming back to music full-time has actually been very easy. I guess it really is like riding a bike, a few wobbles initially but after a short time you find yourself back in your stride and wondering why the fuck you left it so long!”

As a fully “live” artist – how has your show and sound been developing in that time?

“Quite a bit. I’ve been pretty lucky in that I have almost done something like 100 shows over the last few years, and you can only imagine how many things have gone wrong during them. After a while, your confidence enables you to problem solve more effectively and avoid total panic when a machine decides not to behave itself!

I work more or less as I did back in the 90s with an MPC as my centrepiece and a few other boxes providing additional elements. It’s a very simple and basic set up but I’m very comfortable with it and over time, it has enabled me to loosen up my performances.

I have to say admire those guys who can turn up and have no idea of how it is going to go when they press play, but that kind of improvisation just wouldn’t work for me. I have a bit of structure worked out in 4/5 segments – kind of like how some DJs work, I know where I want to get to but am much more open and able to let the moment take me there than in the past.

Ultimately, it’s all about your state of mind. If you’re having a top day and you play for great promoters – you find yourself in a much better position to deliver. I guess I’ve been really lucky that I’ve not really had a bad gig to speak of (so far).”

Have there been any big standout moments?

“There have been some great nights. Toi Toi in London back in 2014 was probably the first of those – great crowd, tremendous response and just what I needed at that stage. Hearing my music through the system at Amnesia last year was an experience in itself and recent gigs at Veniceberg, Nouveau Casino, Glazart and Sankeys in Tokyo have been hugely memorable.

There’s been some tough ones though – usually when a machine decides not to play ball.  Last year I was playing at a Rekids party at Panorama Bar and my TR-8 went astray for about 10mins. In the past that would have really thrown me and put me in panic mode. But I just worked out how to play through it and thankfully got the whole place vibing. I ended up carrying on for a good half hour longer than usual. So maybe the fuck ups can have a positive outcome.”

Bluetrain has been getting a lot of attention of late – do you think this is just a natural evolution of people’s taste or do you see it as something else?

“That’s very hard to say and talk about objectively really. I have no idea, it’s amazing how the music has lasted though – I’m very tied to it so it’s difficult to comment. There’s definitely something about the rawness of the vibe which speaks to people. Maybe there’s something that reaches out on that level? There’s definitely a new generation of people who are out there buying and digging out records, discovering fresh material and a lot of what I did has become quite limited – so maybe that has had an influence too.”

What was the original inspiration for the project?

“It was really just a continuation of what I was doing as Bluespirit really, maybe with a bit more of a dirty edge to it. At the time, I think I was just experimenting and trying out different ideas and it just matured into a hyper minimal dub thing. It wasn’t like I was sat there trying to make dub techno. I would always say it was more based on experimentation and the whole reggae vibe just sort of came out of that.” 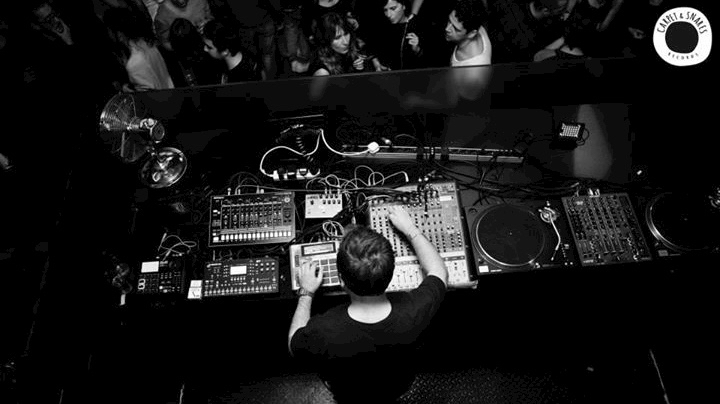 Rumour has it there may be some reissues coming…

“Well, a lot of people have been asking about represses of the old material and I thought it would be cool to have some of my favourite tracks from the back catalogue reissued – for those that can’t get hold of, or afford, the original 12’s. I’m keen to keep those originals special, so as far as reissues go: we’re going to put out some selected tracks rather than full EPs. I simply don’t think it’s fair on the people who have paid large sums for the original 12’s to just put them out again at a fraction of the cost. The first of these will be available sometime in July, and if that goes well maybe there will be another later in the year.”

You recently recorded a double 10” for Sushitech. Has much changed in your approach this time around to writing for it?

“No, not really.  Like I was saying – a lot of what goes into my music making starts with experimentation and putting together 4 or 5 ideas/loops and just really letting things flow. Keeping it raw and simple is pretty much the key. I think with this double pack, I did want to achieve a good range of sounds overall – not just have the same idea repeating itself (however good that sounds to some people). I basically just tried out a whole bunch of jams and let ideas evolve and played them to Yossi at Sushitech, and eventually we had a selection we were both happy with.  In many respects, I like to work on something in one style for a bit, then leave it and  to work on something else. It keeps everything fresh.”

Your studio set up has evolved quite a bit since we last chatted – how is it looking now?

“Well when we last spoke I was slowly getting back into hardware again so it’s evolved quite a bit. More drum machines, more synths and many more effect units. Not to mention metres and metres of cables surrounding me! Although I still kick myself daily for selling my 909 , 808 and 101, I think I’m happier with my set up now than I’ve ever been. My sound is a minimal one so I don’t need to have the latest £2k synth to make music. It really is all about creating the right atmosphere with processing – layering sounds , adding effects etc. so every little box gets used at some point, although all you may hear is a kick, hi hat, clap, bass and simple stab!”

Do you have a favourite bit of kit?

“Right now, I’ve really got into using the Eventide H9 – it’s a pedal effects unit that has effect algorithms of 4 Eventide pedals inside. It’s very compact and a lot of fun to use on the road. You can really dial into a sound with ease and get some amazing results from it. Effects are a big part of the sound I am trying to create and this is pretty inspirational so, all in all, it’s a good buy.”

What do you think makes the essence of a good dub when all is said and done? Pick 3 prime examples…

“What I do isn’t proper dub in the traditional sense, it’s dub inspired techno.  But a good dub for me is all about the bass- a solid big bottom is what it’s all about. Added to that it’s all about creating space through echo and reverb, giving things a real trippy edge, stripping the music down to the bare essentials and creating something new in the process.”

There are so many prime examples out there, it’s almost impossible to choose but these three have been floating my boat lately:

“A classic and maybe a tad obvious but this has everything that I love about 70s dub – spring reverbs on the drums, superb bass and trippy echo. Can’t be beat!”

“I could’ve chosen any track from the album but there are definite echoes of this one in an old Bluetrain tune “Give I strength”, so it seemed appropriate to slip it in.”

“Another one featuring the Roots Radics band, superb drums on this one.”

You’re going to be debuting your new live show during Sonar week – how did that come about?

“Isis at Toi Toi has been bugging me (gently I might add) for a while about the idea but I was never 100% sure. I normally tend to play a wide variety of music in my sets and I was concerned a Bluetrain show could be a bit too one dimensional. We spoke again earlier this year whilst I was completing the new double 10” and having a new batch of fresh tracks together seemed like a perfect time to do something different.

The main thing I’ve been working on is trying to achieve the right type of structure and sense of flow so that I can try things out and let the crowd decide in the moment where things end up (if that makes sense). After a few weeks of practice, I think I have enough variety to keep me interested and hopefully the crowd too.

I guess I accepted the challenge with a bit of hesitation but have really enjoyed the opportunity to mix things up and push the boat out a little further. Toi Toi always attract a musically open crowd and the line up is looking sweet, so I’m sure it will be a great night – I can’t wait.”