Producing for over fourteen years now and hailing from Austria – Florian is known for his deep, powerful take on music. His productions are characterised by his love, knowledge and mastery of machines. His talent lies in enabling his equipment to speak and groove, connecting and creating sounds via a custom built web of sequencers.

A DJ, live performer, studio producer and sound designer, he has established an impressive production base for himself with an exciting hardware set up that includes Modular Systems, analogue mixing desk and stack of classic synthesizers. In addition to his numerous solo releases and collaborations with international artists, he has remixed the likes of Hot Chip and Royksopp. He also finds the time to run his own sound design brand Riemann Kollektion. With so much experience under his belt, Florian has developed a special connection with his set up, letting the machines speak where he feels his own words don’t really fit.

Having recently featured on a monster styled improvised machine jam with legends Speedy J and ZV_K for Boiler Room, we tracked him down to his Techno bunker for a chat and a cup of tea.

Where did your love for electronic sound and machines come from?

“I guess it all started with my childhood really, in the 80s and 90s there was electronic music all over the radio and on CDs I bought. I pushed myself into the direction of Techno around 1996 when I started putting together House and Techno records for a radio show I was asked to do.”

It wasn’t that long after buying your first records that you actually got into dj’ing in clubs, right?

“I was Dj’ing with CDs in local clubs and bars until midnight when I was 14 but quickly I fell in love with records and started playing out more and more, working my way into more serious nightclubs by the time I was 16. The internet wasn’t very developed at that time so it was all about making contacts through meeting people in record shops and in clubs.”

What made you think about getting into music full-time?

“When I was 18 and had finished School, all I had in my head was music, music and more music. I chose to do a degree in Mechanical Engineering and applied to the University in London. Luckily, they accepted me and I loved from Austria to London. By the time I turned 20, I found myself releasing my first records and three years later, I graduated with a Master of Arts in Music Technology.”

Berlin called, why did you decide to move?

“I spent a few months there in 2006 but was still living in London, as my music started taking off I found myself flying back and forth because I had a gigs in Germany every other weekend. As it was sort of becoming my second home, it seemed like a really great idea to move over and build my studio there and continue to make a living out of music. Back then the city was already the capital of Techno and it was super cheap…”

What did your first studio set up look like then?

“Essentially, I focused on having great acoustics and speakers, I almost had no hardware at all – I moved so much before that I couldn’t manage anything else. But as soon as I got settled, I’ve slowly but surely built up a massive wall of analogue sound, mainly with Eurorack Modules.”

How does it look now?

“I’m running out of space to be honest! I’m satisfied with everything I have, I create a lot of music and I feel like I have everything I need.” 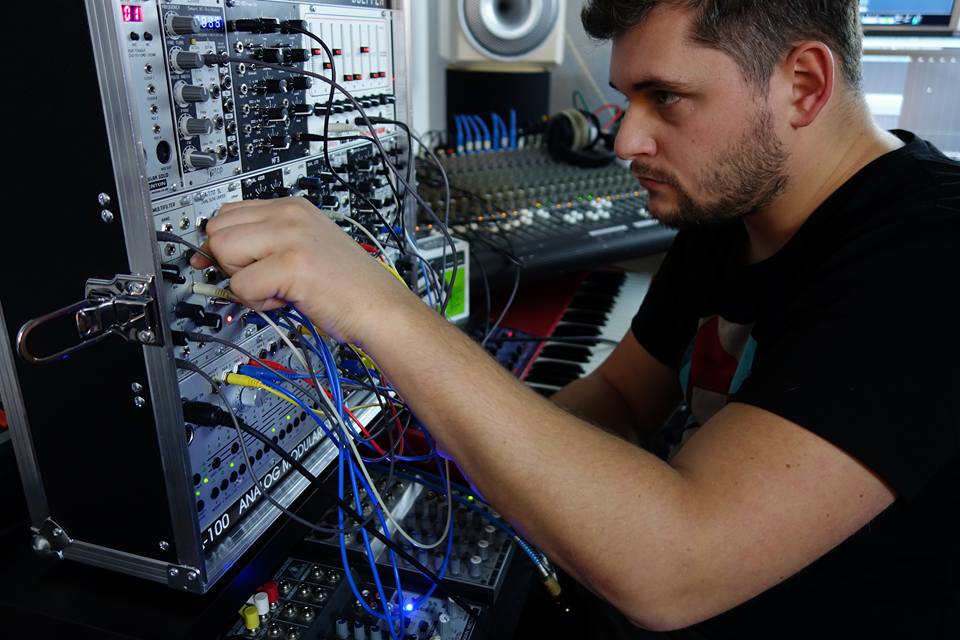 You’ve spent a long time testing and tweaking a set up for live performance too,what do you use?

“I have a so called travel modular rack which fits into hand luggage – it took me ages to get it right because of the limited space, almost every module has got two functions and interconnects and modulates with each other. An LFO is used to modulate 4 things, not just one for instance. The ride always plays on the same note or trigger as the off-beat hihat, and the crash plays always at the same time like the kick. I’ve kind of had to make quite a few compromises really which are necessary, but I’m ok with that.”

What are the pros and cons of modular from your experience then?

“The pro is that you shape your own sound, the distortion and filters sound very unique and organic. You can also see what you’ve connected and don’t have to click with a mouse to access sub menus etc. When you buy modules in gear shops, more often than now you meet other people and end up talking about modules and stuff. The disadvantage is the price, it’s very expensive and you sort of quickly get addicted because you always need another module. That and the actual weight of the racks, you can’t move them around because they get really heavy if you have a lot of equipment. There’s no real way of saving the sounds you make either, or at least not that easily but there again I wouldn’t say it’s the purpose of it anyway. All in all, modular is something for people who love technical stuff and electronics, combined with making music.”

In terms of achievements – what do you see as your biggest win?

And vice versa, is there anything you wish you hadn’t done?

“Of course! But I prefer to concentrate on the future because I can’t change the past. Just learn from it, that’s the main thing really isn’t it.”

Has there been a particular piece of equipment you bought that really took to another level?

“Not really, for me it has always been the total sum of everything I use. That said, the analogue Mackie mixer from the 1990s I use these days does contribute a lot to this (and of course the modular system).

“FLASH Recordings is my Techno label, we release both on digital and vinyl, it’s a platform for my own music and a few other artists I support. Riemann Kollektion is my sound design label, with over 80 releases now – the analog distorted kickdrums is one of its best sellers surprisingly. Probably because producers who use analogue samplers need rough sounding samples for their Elektron drum machines or AKAIs. They’re kind of secret weapon – I’ve produced almost all of the content and use the samples in all of my tracks. The key is to change/alter them a bit so they sound unique.”

How have your own productions evolved since you first started Flash?

“My music and production has changed a lot over the years because my technique and the setup I use has changed over time, I’d say my taste has also evolved significantly. When I started Dj’ing, I used to buy a lot of hard Techno records from Jeff Mills, Surgeon, Gaetano Parisio and The Advent. Then the whole Minimal thing came  alonf and I liked it because it was the opposite approach, with so few elements. I started to produce music when I was 16 and that was the style really – early Minimal, that said it was always Techno to me, not house. It opened the door for an international career when I was 20, over night I started flying around the world because I’d made some popular records for Trapez. After a couple of years, house started coming back in from 2012, I really got back to more of a classic Techno sound.”

You very much exist in your own space and community – do you see yourself as an outsider then?

“Kind of, but not so much as it looks like. The thing is I’ve learned many things on my own and now have the knowledge and experience of all sorts of different fields. I’ll  probably start doing more collaborations again in the future but I do like going at my own pace although I should add there are some people working in the background with me.”

What’s been your scariest moment with your new live show?

“The set up I have is actually my first full live act using a modular synth, so many things could go wrong and some little things have but it’s been fine, I do learn something with each show. I feel really comfortable with it now and get better with each gig. I can express myself better because I don’t have to think so much about the technical side of it, even though it’s complex. If I accidentally pull out a cable, it takes seconds to put it back into the right hole but seconds can be very long in a live situation.”

“Yeah, I got asked by Boiler Room if I want to be part of an experiment with modular synths – they approached a few of us who have never played together to do a gig. It sounded interesting, so I immediately said yes.  It was a totally new situation but I liked it the idea because something amazing came out of it  – of course there were some short boring/odd moments in the performance but there were also some amazing parts, I would have never played like this alone. I found it interesting to learn how other people do certain things, we didn’t really talk that much or even prepare, we just discussed what everybody would roughly do (ie. who would control what part).”

Where do you see the music evolving?

“In terms of Technology, everybody talks about streaming but that’s only good for large labels with a lot of music, because the payment is extremely low per track. I’ve totally fallen in love with Bandcamp. There are so many options like you can generate free downlaod codes, give discount on your full discography etc. They pay much more than normal shops and it’s also a social network because you can see what other people support.

In terms of Techno music, I would say it’s getting much faster and a bit harder but not dark. That’s at least where I am moving at the moment but it changes a lot – we are living in non-linear times, the change comes with the power of two.”